She is well-known for her role as Patricia Kopong in The No. 1 Ladies’ Detective Agency, Dayana Mampasi in the ABC thriller Quantico and Samkelo in the romantic drama film Catching Feelings.

In this post, we take a look at the personal life of Pearl Thusi, her career and the movies she has featured in. 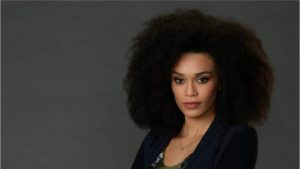 In her previous relationship with sports presenter Walter Mokoena, she gave birth to a daughter, Thandolwethu Mokoena.

She was once in a relationship with SuperSport and SABC sports journalist Robert Marawa but their breakup was confirmed by Marawa in August 2017.

The actress set tongues wagging on social media in January 2018 after hinting that she has found love again. “Just when I said I couldn’t be bothered with love, I end up falling for someone bomb…” she tweeted. She has however not revealed his identity.

She is also featured on the second season of ‘Quantico’ in New York.

She is considered to be one of the richest actresses in South Africa and has an estimated net worth of $2 Million.