Zenande Mfenyana (born 11 October 1985) is a South African actress that is popularly known for her role as Noluntu Memela on a popular Soapie Generations.

She now plays the role of Goodness Mabuza on the soapie The Queen.  Zenande has a Bachelors Degree in Drama from the Tshwane University of Technology. 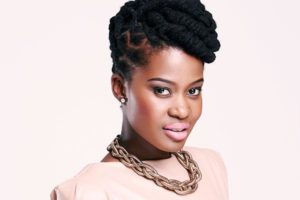 She was born on the 11th of October 1985 in Kagiso, Krugersdorp, South Africa. As of 2021, she is 36 years old and celebrates her birthday on October 11th every year.

Through a Twitter post, she said that she was dating a person who didn’t like the way she wore, the friends she kept, the place of work and the place she lived. Due to all those reasons, she broke up with the guy since she couldn’t yield to his commands.

She later tweeted that “Oh did I mention that I’m dating a really amazing person right now, it’s been over a year of pure bliss.”

She is Xhosa and was born in Kagiso, West Rand. Her family later moved to Komani, Eastern Cape and her father is a pastor.

She has a sister named Akhe Mfenyana. Her sister surprised many as she made an appearance on the popular drama The Queen Mzansi, where she played the role of an enigmatic woman named Goodness.

Zenande couldn’t have been more proud of her sister. “Waiting for 21:00 so I can watch babycakes Akhe Mfenyana doing the things on The Queen Mzansi,” she said.

She has an estimated net worth of $500,000 which she has earned as a actress.