Pearl Jansen (born 1950 in Bonteheuwel) is a South African beauty queen and singer who ends up first runner-up in the Miss World beauty contest in the UK in 1970. 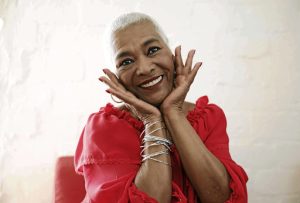 She was born in the year 1950 in Bonteheuwel, Cape Town, South Africa.

Even though she competed as “Miss Africa South” due to apartheid, she became the first black woman to represent her country at this level.

Jansen entered the 1970 beauty pageant when she was 22 years old, and her story is told in the film Misbehaviour. Because of apartheid, she stated that nothing changed for her after the competition. She didn’t pursue her passion of being a vocalist until she was 58 years old.

The 1970 competition was place in London, England. Because the organizers had allowed two participants from South Africa, one black, Pearl Jansen, and one white, it started with a squabble. Then there were protests by women’s liberation activists in the evening, with flour being thrown. Bob Hope, the comedian, was also heckled. Miss Granada Jennifer Hosten triumphed, becoming the first black woman to win Miss World, while Pearl Jansen came in second.

She has an estimated net worth of $200,000 which she has earned as a beauty queen and singer.