Demi-Leigh Nel-Peters (born 28 June 1995) who is also known as Demi-Leigh Tebow is a South African model and beauty queen who was crowned Miss Universe 2017. 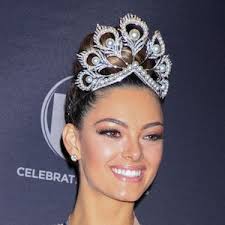 On January 20, 2020 in Franschhoek, South Africa, she got married to Tim Tebow, a professional American football quarterback and former professional baseball outfielder for the New York Mets minor league affiliates

On March 26, 2017, Nel-Peters debuted in the pageantry world as the Western Cape’s representative in the Miss South Africa 2017 competition, which she won.

She had the right to represent South Africa in both Miss World 2017 and Miss Universe 2017, however due to the overlap in the dates of the two pageants, she was only sent to Miss Universe, which was held in Las Vegas, Nevada.

Miss Universe 2017 was crowned by departing titleholder Iris Mittenaere after she won the competition. Margaret Gardiner, Miss Universe 1978, was the first South African to win the crown.

On December 17, 2018, Nel-Peters’ reign came to an end in Bangkok, Thailand, which hosted the 2018 Miss Universe competition.

She has an estimated net worth of $1 million which she has earned as a model and beauty queen.