Florence Masebe (born 14 November 1972) is a South African actress, known locally for her role in the series Muvhango. 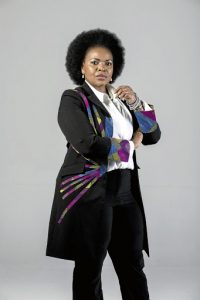 Her big break came in the form of a kids program called Electric Workshop with Urban Brew. It was a continuous upward trend after that. She followed up her breakthrough as a member of the original cast of Generations by winning a variety of gigs, including co-hosting Fokus with Freek Robinson and continuity presenting for SABC2.

She was the host of It’s For Life, a cutting-edge adult education show on SABC2. Until October 2009, she was also a regular on the soap Muvhango.

She joined the cast of the SABC2 soapie 7de Laan on August 21, 2009, in the character of Refiloe Morapedi, Alice’s mother. She portrayed Sis Noni in the 11th season of SABC1’s AIDS drama series Soul City in 2011.