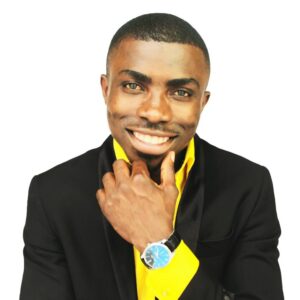 He was born from a pastoral family of 8 children, he was trained in music from an early age and still grew up in the same spirit. Iragi grew up in his hometown Bukavu where he enjoyed learning music and reading Bible every day.

He had a normal childhood life in the family and proudly raised by both parents. His biological father Buhendwa Chihebe died in July 2014 and his mother Nsimire Mwavita is still alive, enjoying the grace of God.

In addition, Iragi Chihebe has been a church worker since childhood. Iragi is a humble, talented, and anointed minister of the gospel.

Postgraduate student at the University of the Witwatersrand in the school Computer Science and Applied Mathematics, Iragi is a brilliant and smart learner.

Holder of a Bachelor’s degree in Computer Science, he graduated from Hope Africa University in Burundi in December 2013 with
distinction which recently allowed him to receive a Postgraduate Merit Award.

He has an international education history by completing the Matric in the Democratic Republic of Congo, Bachelor degree in Burundi, and now Honours degree in South Africa; rest to know where will the Master’s degree and Ph.D. be completed.

Beside Computer science, Iragi has completed a number of short courses and training in Music but also in Management.

Like many artists, Iragi Chihebe’s singing kicked off in Sunday school. His music career started in 2018 with the release of his first single “You are Great”. Before that time, he successfully had
a great and long journey working with different musical bands and church choirs.

From 2011 to 2014 during his time at Hope Africa University, he served as one the top leaders of the Group NENO LA UZIMA, an international Christian group serving in the Ngagara Free Methodist Church in Bujumbura.

Qualified vocal coach and songwriter, Iragi is a worship leader and former Music Director in Church of God Mission SA. He recently released an outstanding and anointed single titled “Mighty and Worthy” which makes his catalog count five titles. He is based in Johannesburg.

He has an estimated net worth of $50,000 which he has earned as a gospel singer.

How to Check Your Matric Results 2021 Online

How to Make Money Online in South Africa (2022): Ideas for Beginners