Refiloe Jane (born 4 August 1992) is a South African footballer who plays as a midfielder for Italian Serie A club AC Milan and the South Africa women’s national team. 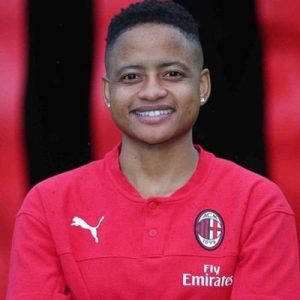 Canberra United made the announcement that Jane had been signed for the 2018–19 W-League Season on August 20, 2018. She and fellow South African Rhoda Mulaudzi joined the team together, becoming the first players from South Africa to compete in the W-League.

Refiloe left the Australian team Canberra United in April 2019 and signed a one-year contract with the Italian Serie A Women’s League team AC Milan for an undisclosed sum.

In 2012, Jane competed for South Africa at the London Olympics. Jane was added to the team roster for the 2014 African Women’s Championship in Namibia in September 2014.

Jane was chosen for the South African Olympic team in 2016. She participated fully in all three of the team’s group games.

Jane made her 100th appearance for South Africa in February 2019.

She has an estimated net worth of $1 million which she has earned as a footballer.