Simphiwe Dludlu (born 21 September 1987) is a South African soccer player who plays as a defender for Mamelodi Sundowns.

She is also the coach of the University of Pretoria women’s soccer team. 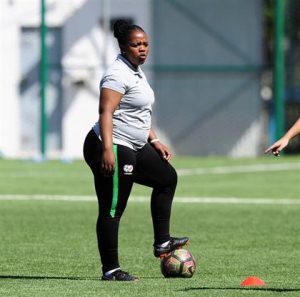 She was born on the 21st of September 1987 in Alexandra, South Africa. She is 34 years old as of 2021 and celebrates her birthday on September 21st every year.

Simphiwe Dludlu is presently a defender with Mamelodi Sundowns in South Africa. She’s known as “Shorty” in football circles.

Dludlu first played for the senior national team of South Africa in a match against Mozambique in 2006. From 2009 to 2010, she served as the team’s captain. Between 2009 and 2010, she led the national team as captain.

Dludlu earned her 50th cap for the South African senior squad in a friendly match against Ghana in May 2014. She was appointed to the roster in September 2014, in preparation for the 2014 African Women’s Championship in Namibia.

In March 2014, she announced her retirement from international football, stating that she wanted to pursue a career as a coach instead. She earned 63 caps for the South African squad during her playing career.

She became the coach of the University women’s football team, which competes in the University Sports South Africa (USSA) competitions, after graduating from the University of Pretoria in 2012. They reached the final of the USSA Football National Club Championships in her first two years with the team. Dludlu received his UEFA B Licence coaching qualification in May 2013.

She has an estimated net worth of $400,000 which she has earned as a footballer.