Siya Kolisi (born 16 June 1991) is a South African professional rugby union player who plays for Western Province in the Currie Cup and the Sharks in Super Rugby.

His full name is Siyamthanda Kolisi and he is also the first black man to lead the Springboks as captain in an international rugby match.

Kolisi was a member of the South African under 20-side that competed in both the 2010 and 2011 IRB Junior World Championships.

He made his official Springbok debut on the 15th of June 2013 against Scotland at the Mbombela Stadium in Nelspruit. 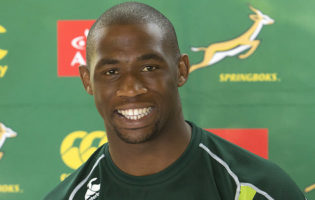 Kolisi is married to Rachel Smith. Their marriage was in a glamorous wedding in the Western Cape in August 2016. Together, they have a son, Nicholas Siyamthanda Kolisi.

He has a take-home salary between R609375 and R50000 per month, making him one of the highest-paid Rugby player

He has an estimated net worth of $500,000 million to $2 million which he has earned from as a rugby player.

Bok captain Siya Kolisi: I want kids to say ‘If he can do it, so can I’

Springboks captain Siya Kolisi carries not only the weight of an expectant nation as he leads South Africa into the Rugby World Cup in Japan, but also the hopes of millions of youngsters who dream of using sport to break the cycle of poverty.

Kolisi was last year named South Africa’s first black Test captain, reward for his all-action style on the flank coupled with a level head and passion for the game that he hopes to pass on to a new generation of players in the country’s townships.

Kolisi, 28, grew up in the impoverished Zwide township in South Africa’s Eastern Cape province, where wearing the Springboks jersey seemed an impossible dream.

But after impressing in a youth tournament he won a scholarship to Grey College in Port Elizabeth, an established rugby school, and set out on his current path.

He believes there are many other ‘Siya Kolisis’ out there around the country, if they can develop the same kind of passion for the game.

“Before, not a lot of us could dream of opportunities like this, but as you can see now it is becoming more normal. It’s possible,” Kolisi, who missed most of the 2019 international season with a knee injury, told reporters on Monday.

“Every day I make sure I work as hard as I can so that kids who came from the same area as me can say, ‘If he can do it, so can I’.

“That is the ultimate goal. I want those kids to believe they can make it if they work as hard as they can.”

South Africa coach Rassie Erasmus has played a key role in Kolisi’s rise and was coach of Western Province when the back-rower earned a first professional contract.

“I’ve known the coach for quite a long time. He gave me my first contract out of school. He knows where I come from, that these types of opportunities, we did not really dream about,” Kolisi said.

The knowledge that he has unwavering support from other senior players in the team is also a big plus, and will help him settle back into the role having not captained the side since 2018 due to his injury.

“I’m excited, but I’m also very nervous, I’m not going to lie about it. I have confidence in my teammates, that they will support me,” he said.