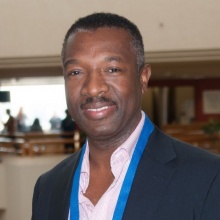 He was born and also grew up in Soweto, South Africa.

In destination marketing, he was South African Tourism’s Marketing Manager in Canada before being named Country Manager of the organization’s operations in the United States, where he was tasked with managing changes in the way South Africa was positioned in the US market and rolling out the country’s new growth strategy.

This was done shortly after the attacks on the World Trade Center Towers in Manhattan (NY) on September 11th, 2001, when many Americans were wary of traveling abroad. Solly, who was born in Soweto, is also conversant in French.

He has also worked with CapeNature and the South African Biodiversity Institute, which oversees the world-famous Kirstenbosch National Botanical Garden in Cape Town, South Africa, as Marketing & Communications Manager.

Solly has also finished the IMM’s Post-Graduate Diploma in Marketing and is currently enrolled in the Vega School of Branding’s part-time BA Honours Program in Brand Leadership.

He has an estimated net worth of $500,000 which he has earned as a Senior Consultant.

Start Your Journey in Cryptocurrency Investing in BitiQ!