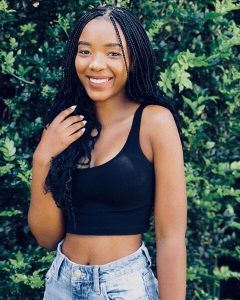 She was born on the 2nd of September 1998 in Cala, Sakhisizwe Local Municipality, in the Eastern Cape, South Africa. As of 2021, she is 23 years old and celebrates her birthday on September 2nd every year.

She performed in commercials for Cheese Curls and McDonald’s after engaging in dramatic shows at school. She graduated from Reddam House Bedfordview and took a gap year after matriculation in 2016.

She made her television acting debut as Nalendi in the situation comedy My Perfect Family on SABC1 when she was 17 years old. She enrolled at the University of Cape Town to study Theatre and Performance but dropped out during her second year.

She joined the cast of Gomora in 2020, playing Buhle in the Mzansi Magic series.

She starred in Netflix’s Blood & Water later that year. Puleng, Qamata’s character, has a sister who was kidnapped when she was a baby, and Puleng is seeking to show that a successful swimmer from a fancy school is her sister.

The casting director for Blood & Water, Kutlwano Ditsele, was also an executive producer on Gomora and invited Qamata to audition, which she did successfully.