Bianca Amato (born in Cape Town) is a South African actress known for her portrayal of Philippa De Villiers in the original cast of the South African soap opera Isidingo. 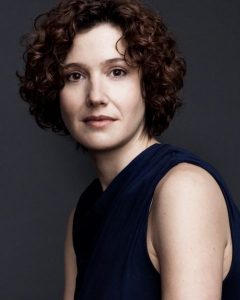 Amato made his Broadway debut in Tom Stoppard’s Tony Award-winning trilogy The Coast of Utopia, as well as the 2013–14 Broadway revival of Shakespeare’s Macbeth.

In the 2011 Broadway revival of Tom Stoppard’s Arcadia, she also understudied the parts of Hannah Jarvis and Lady Croom. Off-Broadway, Amato has played Emma in Trumpery and Bill Irwin’s Mr. Fox: A Rumination. In 2012, she costarred as Calantha in The Broken Heart, and in 2013, she starred as Olga Knipper in Neva.

Amato also played Amanda in Maria Aitken’s production of Noel Coward’s Private Lives, which premiered at the Huntington Theatre Company in Boston in 2012 and returned to the Shakespeare Theatre Company’s Lansburgh Theatre in Washington, D.C. in 2014.

She also played Regan in New York’s Theatre for a New Audience’s production of King Lear in 2014.