Bongi Ntuli (born 28 March 1991) is a South African professional soccer player who plays for AmaZulu F.C. as a striker. 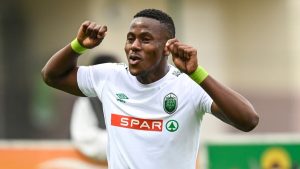 He was born on the 28th of March 1991 in Pietermaritzburg, South Africa. As of 2022, he is 31 years old and celebrates his birthday on March 28th every year.

Before joining the Golden Arrows’ reserve team, Ntuli began his career in the Vodacom League with Sobantu Shooting Stars. He made his bow in the first half of the 2012 season for Arrows.

In addition, he went on to join Mamelodi Sundowns the next year, but he was up against stiff competition in order to make the starting eleven, and so was only with the team for six months. Afterwards, he joined AmaZulu on loan. In 2015, Ntuli was loaned to Platinum Stars till 2018.

Ntuli went on trial with Djurgårdens IF in July 2018. Due to Ntuli and Djurgardens not being able to agree on the financials of his deal, his relocation to Europe never materialized.

After being on loan, it was confirmed in August 2018 that Ntuli had joined AmaZulu permanently, with his contract switching from a loan to a permanent agreement after he was part of a swap that saw him stay with AmaZulu while Emiliano Tade joined Sundowns.