Quinton Fortune (born 21 May 1977) is a South African former professional footballer who played as both a midfielder and a defender. 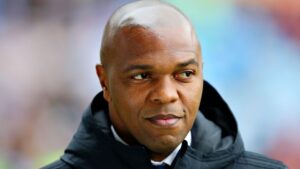 In 1996, Quinton Fortune joined Atlético Madrid. Fortune signed for Manchester United for a fee of £1.5 million on 1 August 1999. He made his first appearance for the club against Newcastle United on 30 August.

His first goal followed on Boxing Day 1999 against Bradford City, and he scored twice against South Melbourne in the 2000 FIFA Club World Championship.

However, he was awarded a Premier League winner’s medal by special dispensation following United’s title success in 2003 during which he had appeared 9 times in the league that season. It is commonly incorrectly reported that this medal had been left at the club by a former player.

After being used mostly in a squad rotation basis for his career at Manchester United, he was released by the club ahead of the 2006–07 campaign.

After a successful trial, Quinton Fortune joined Bolton Wanderers for the 2006–07 season.

In September 2008, he joined Sheffield United on trial. On 6 October 2008, Serie B club Brescia confirmed to have reached an agreement with Fortune; the transfer was finalised on 23 October, with Fortune signing a one-year contract with the Rondinelle.

On 2 February 2009, Tubize signed Fortune on a free transfer.

On 4 August 2009, he signed a short-term deal at Doncaster Rovers. He scored his first Rovers goal against Ipswich Town on 19 September 2009.

He was sent off in a 2–2 draw against Scunthorpe United. Fortune was not offered an extension to his deal at the club and was released on 4 February 2010.

In the first match against Paraguay which ended in 2–2 draw, he scored South Africa’s second goal from a penalty kick in injury time.

Later in the next match, South Africa beat Slovenia 1–0 in which Fortune providing the assist for the winning goal. Although both South Africa and Paraguay finished the group with the same points and goal difference, it was Paraguay who occupied the second place and advanced into the next stage because Paraguay scored more goals than South Africa.

In 2012, Fortune returned to Manchester United to train with their reserve team while working on his coaching badges, which he completed in 2013.

Fortune also worked for ITV4 during their coverage of the Africa Cup of Nations in February 2015.

On 4 July 2019 Fortune become Under 23 assistant coach at Manchester United.

On 8 September 2020, Fortune was appointed as First Team coach of Reading.