Brad Binder (born 11 August 1995) is a Grand Prix motorcycle racer from South Africa. He is also famous for winning the Moto3 World Championship in 2016. 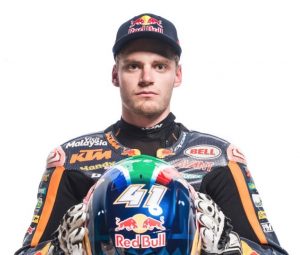 He is believed to be currently having a romantic relationship with girlfriend Courtney Renniers.

In 2008, he competed in the Aprilia Superteens Series, a British competition, for the first time. He came in the second position in the first race but crashed in the second. He raced in the Red Bull MotoGP Rookies Cup three times, finishing 14th in 2009, 5th in 2010, and 7th in 2011.

He has an estimated net worth of $1 million – $5 million which he has earned as a Motorcycle Racer.