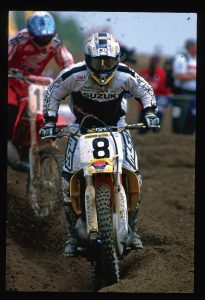 He was born on the 13th of October 1973 in Johannesburg, South Africa. As of 2021, he is 48 years old and celebrates his birthday on October 13th every year.

Albertyn won several national motocross championships in South Africa and the Netherlands before going on to the World Motocross Championship Grands Prix.

Albertyn and Belgian Stefan Everts, both based in Europe, had a fierce rivalry in the early stages of their careers, with Albertyn generally winning. Albertyn won the 125cc World Championship in 1992 before switching to the 250cc class in 1993.

Albertyn took first place in the premier class on his first try. In 1994, he successfully defended his title. He was also getting offers to compete in the AMA National motocross and supercross championships in America at the time.

He has an estimated net worth of $200,000 which he has earned as a motocross racer and real-estate developer.