Sureshnie Rider (born 25 October 1977) is a South African journalist and radio DJ known for presenting the news and hosting the 5FM Top 40. 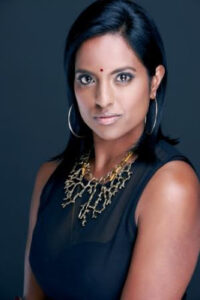 Following her qualification, she started her career at Durban Youth Radio on campus. She went on to work as a news reader and journalist for Gagasi FM before joining Lotus FM as a weekday host.

Sureshnie moved from Durban to Johannesburg to work as an on-air host and news reader for 5fm.

Sureshnie also works as a voice over artist and an MC for private and business activities. On foreign flights with South African Airways, she hosts the Hit Express Show.

She was also the production manager for SABC3’s now-defunct weekday chat show 3Talk with Noeleen.

She competed in the eighth season of the reality show Strictly Come Dancing as one of ten celebrity contestants in 2015. Obed Katlego Mofoleng, a trained dancer, was her partner.

She has an estimated net worth of $80,000 which she has earned as a journalist.