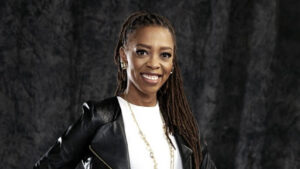 Angie first joined 5FM in 2008 as a news reader, where she put her experience of current events to good use. During a spell with campus radio while pursuing a post-graduate degree in chemistry at the University of the Free State in Bloemfontein, she found her love for radio and current affairs.

She began her career by hosting a weekend chat show and reading news bulletins for the afternoon drive show. When she was hired to read news on local radio station OFM, it felt like a logical transition to commercial radio.

During her time at OFM, she worked on her Master’s degree in Molecular Biology during the week and spent her weekends reading the news.

She is well known for her role in the travel docu-series Vaya Mzansi, in which she and DJ Cleo ride across South Africa on motorcycles in search of fascinating stories – political, geographical, illegal, and ideological – all told through the eyes of locals.

Khumalo comes from a news and current affairs perspective, and she jokes that she knows a little bit of everything. Angie enjoys reading books and biographies, as well as watching movies.

All things easy is another of her interests. Angie describes herself as a petrolhead, speed fanatic, and adrenaline junkie.

She works at MetroFM as a sports and news reader.

Angie Khumalo has an estimated net worth of $100,000 which she has earned as a radio DJ.

A New Rebrand In the Crypto Market: Taking a Closer Look at Bitcoin Profit