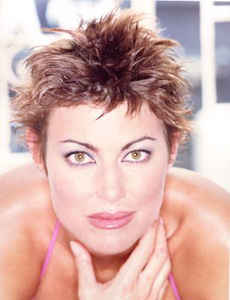 She was born on the 16th of August 1970 in Johannesburg, South Africa. As of 2021, she is 51 years old and celebrates her birthday on August 16th every year.

She is married to Andrew Schupak and together they have a son named Jett. She lives and works in New York City with her husband and son.

While in the School of the Arts in Johannesburg, she majored in painting. She signed a modeling deal with Ford Models when she was fourteen years old. Bernstein switched her concentration from modeling to music at the age of 23, and by the age of 26 she had signed three record deals with big labels.

Bernstein returned to art later, concentrating on portraits that aim to depict the darkest sides of the subject’s personality. Suicide, anorexia, and alopecia victims have all been part of her work. Her style has been described as “surrealistic anime.”

She has an estimated net worth of $500,000 which she has earned as a model, actress, and singer-songwriter.