Vasco da Gama (born 29 January 1959) is a South African politician with the Democratic Alliance who currently serves as the council speaker. 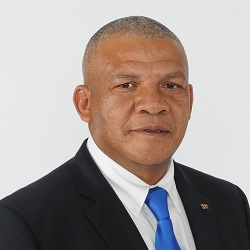 He was born on the 29th of January 1959 in Louis Trichardt, Transvaal Province, South Africa. As of 2022 he is 63 years old and celebrates his birthday on January 29th every year.

He campaigned as a DA mayoral candidate for Johannesburg in 2011, but was defeated by Mmusi Maimane in front of a panel of 30 people, including party leader and Western Cape Premier Helen Zille. Da Gama was chosen head of the DA’s caucus after Maimane’s departure to the National Assembly in 2014, a position he had previously held.

Vasco Da Gama was chosen speaker of the council in August 2016. In December 2019, he was replaced as Speaker by Nonceba Molwele of the African National Congress (ANC). Following the local government elections in 2021, the DA nominated him as their candidate for council speaker.

He received 147 out of 265 votes in the initial council meeting on November 22, 2021, and was elected council speaker. Eunice Mgcina of the ANC garnered only 118 votes.

He has an estimated net worth of 1 million which he has earned as a politician.