Lex Mpati (born 5 September 1949) is a South African judge, Chancellor of Rhodes University, and former President of the Supreme Court of Appeal of South Africa. 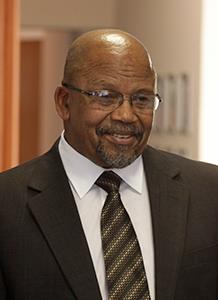 He got married to Mireille Mpati (née Nontobeko)

He grew up in the Eastern Cape, attending St Joseph’s Catholic School in Fort Beaufort and subsequently Mary Waters High School in Grahamstown, where he graduated in 1967.

Mpati started at Rhodes in 1979 under a special permit (needed of black students) and received a BA in legal theory and Xhosa in 1982. In 1984, he received his LLB degree. He was only the second black Rhodes student to receive an LLB degree.

From 1997 to 2000, he was a judge in the High Court’s Eastern Cape Division. He was appointed to the Supreme Court of Appeal as a Judge of Appeal, first as an acting member and then as a full member in December 2000.

In 2003, he was named Deputy President of the Supreme Court of Appeal, and in August 2008, he was named President. He is also a member of the Commission on Judicial Service.