Khotso (born 13 September 2020) is the son of popular South African artist Cassper Nyovest and his bae Thobeka Majozi. He is their first child together. 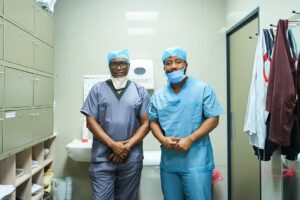 Khotso was born on the 13th of September 2020 in South Africa. He is 1 years old as of 2021 and celebrates his birthday on every 13th day of September.

His father is known as Cassper Nyovest whose real name is Refiloe Maele Phoolo while his mother’s name is Thobeka Majozi.

The rapper had taken to Social Media on Sunday evening, September 13, to post a picture of himself dressed in medical scrubs and preparing for the birth of his son writing “Let’s f*cking go”.

He told fans on Twitter that nothing could prepare him for the moment he saw his son, revealing that their little one had arrived and the couple had named him Khotso.

Cassper made the announcement of the birth of his son shortly after on Twitter and also revealed that he’s been named Khotso.

This album means sooo much more and it makes sooo much sense now that my son, Khotso is here. #AnyMinuteNow

The rapper had announced in June that he and his bae Thobeka were expecting their first child together, as he shared a photo of an ultrasound on an album cover.

“I’m going to be a father any minute now so I decided to name my album AMN (Any Minute Now). The album cover is an actual scan of my son in his beautiful mother’s womb.

The album was released on Friday, September 11.