Chad le Clos (born 12 April 1992) is a South African swimmer who is an Olympic, World and Commonwealth Gameschampion as well as the Commonwealth record holder in the 50 and 100-metre butterfly. 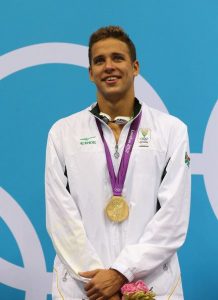 He also finished second in the 100m freestyle and third in the 4×100 medley relay with teammates Cameron van der Burgh, Calvyn Justus, and Brad Tandy. With his victory in the 200m butterfly, Le Clos became the first man to win three successive Commonwealth titles in the event.

He has an estimated net worth of $20 million which he has earned as a swimmer.