Tatjana Schoenmaker (born 9 July 1997) is a South African swimmer specializing in breaststroke events who won the silver medal in the 100-metre breaststroke at the 2020 Olympic Games. 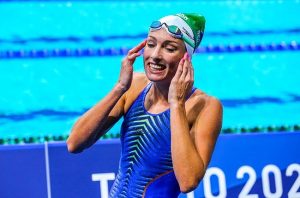 She was born on the 9th of July 1997 in Johannesburg, South Africa. As of 2021, she is 24 years old and celebrates her birthday on July 9th every year.

She qualified to represent South Africa at the 2020 Summer Olympics in June 2021.

Schoenmaker took silver in the final, becoming the first South African woman to medal in swimming in an Olympic Games since 2000.

She has an estimated net worth of $1 million which she has earned as a swimmer.