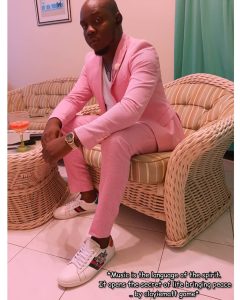 He later advanced to event decor at Spaces College

2015 – 2016: He recorded his first single which was released as an independent artist.

In 2017, Clayiematt Gome began to write a list of songs including “Pano Pane Nyasha” (there is grace here) which were recorded in the year 2019. In the same year he Recorded grace volume 1 and Volume 2 which included “Pano Pane Nyasha”. The song was no 1 every sunday on the gospel charts for 3 months ( at classic FM). He then relocated to south Africa and recorded “Healing Rain” ft Thandeka and Ray.

He then rereleased a song with with minister Brian (you are beautiful) and Lastly he has finished his brand new album which will be released next month November 2021 called ” The Wave” ,the album is with Power Africa Records and it includes 8 tracks.