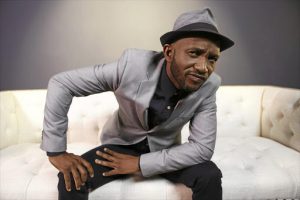 He was born on the 18th of April 1978, in Maokeng near Kroonstad in the Free State province, South Africa. He is 44 years old as of 2022 and celebrates his birthday on April 18th every year.

In 1995, Kau enrolled in Pretoria Technikon (now called the Tshwane University of Technology). He studied electrical engineering for a time but stopped out in 1996.

Following that, he enrolled at the University of Cape Town to study speech and acting. As a result, David received his diploma in speech and drama in 1998.

The popular South African comedian is happily married and his wife is known as Thalia Zarkalis.

In 1998, he appeared at the Smirnoff International Comedy Festival, which was his first significant comedy event. The following year, he returned to the festival, touring from Cape Town to Durban.

Since then, he’s performed his own comedy specials and headlined a number of comedy festivals. He also co-hosted the stand-up comedy show Blacks Only, which he co-created.

He hosted the 3rd Channel O Music Video Awards in 2006. He was a co-presenter of Nelson Mandela’s 46664 concert the following year. He hosts and judges the SABC1 reality talent show So You Think You’re Funny!, which aired on November 4, 2008.

He has an estimated Net Worth of $1 Million which he has earned as a comedian.