Gérard Rudolf (born 20 April 1966) is a South African film actor and poet who started his career in 1992 with Arende II TV Series. 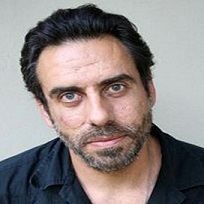 He served in the military for two years after graduating from high school in 1983. He enrolled at the University of Pretoria’s Drama School in 1987 and graduated in 1989.

He spent a year performing on stage in Shakespeare plays, comedies, and dramas with the CAPAB theatre group. In 1991, he left the group to form Makeshift Moon, a theater company concentrating in unique South African works.

He gained popularity as a fearless performer and vocal critic of the Apartheid state at the time, as well as a campaigner against compulsory military service.

In 1991, he began to acquire an interest in film, and throughout the next decade, he starred in a number of lead and supporting roles. He became the head of drama at CityVarsity in Cape Town in 1998 and stayed there until 2002.