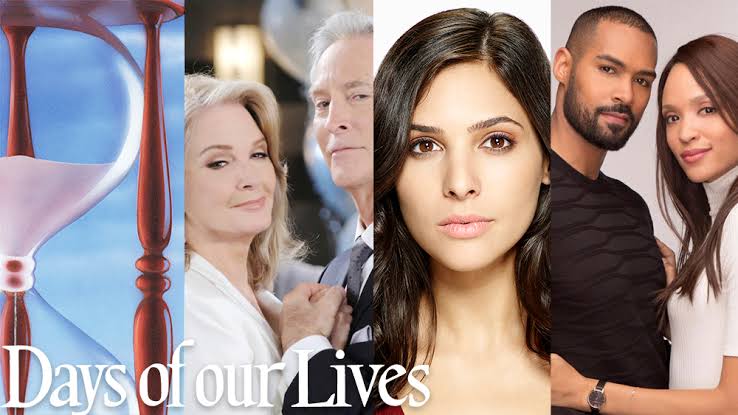 Brady convinces Maggie that he wasn’t drinking. A defiant Chloe finds herself captive in Mexico City while Lucas tries to figure out why she left him. Kate breaks the news to Chad that Abigail has a split personality as Marlena tries to get Laura to let her help.

Kate tells Chad that Marlena thinks he might be the only one who can get through to Abigail’s alter, Laura. At the same time, Abigail’s vision of Ben (in her head) tries to convince her she’s mentally unstable. Chloe is shocked to see Theresa before her, and learns she’s being held prisoner by Mateo (El Fideo).

Maggie tells Claire to let Eve know that Brady didn’t help her cheat in the contest. Brady makes one more passionate declaration of love for Eve. Lucas tells Maggie he’s determined to find out the truth about Chloe’s letter. He goes to Kate, who warned him Chloe would break his heart.

Abigail shares an emotional reunion with Chad, who gently breaks the news about her alters, telling her about Laura and Gabby. Stefan makes a plea to Vivian to help him save Gabby. Later, Kayla tells Stefan they won’t let him near Abigail. Marlena talks to Kate about Andre’s betrayal.

After consulting with Marlena, Chad takes Abigail around town to relive the night of Andre’s death. As Chad comforts her, Stefan arrives to take on the scene. Hope is forced to release Stefan from police custody. He demands to know where Abigail is. Marlena and Hope refuse to tell him.

Kate threatens to reveal Vivian’s corporate espionage/secret partnership with Andre to the DiMera Board, and brings up Leo. Will tells Paul that he met with Clyde, who told him that he might find information about the drug Rolf used on him.

Now that Abigail’s remembered killing Andre, Chad tries to find out what happened next. Laura emerges. Later, Gabby emerges, to speak to Stefan. Kate refuses to be Vivian’s partner and decides to take over Vivian’s plan herself.

Vivian and Kate continue to struggle for the gun, and Stefan hears it go off. Rafe questions Kate. Stefan blasts her. Kayla reveals the news regarding Vivian. Abigail insists on giving a statement to Hope about killing Andre to try to get Gabi released from prison.

Brady has a dream about Theresa returning to him, but reassures Eve. Earlier, Victor clashes with Maggie over Eve and Brady’s relationship. Theresa plots with Chloe to get the goods to bring El Fideo down. Lucas checks on Kate.

Victor tries to convince Brady not to marry Eve because there’s still a chance Theresa could come back to Tate and him, and makes him a great offer which worries Eve. Chloe meets Mateo. Meanwhile, Theresa is stunned to find herself face to face with Xander. She tries to persuade Xander to help her.

Leo learns about Vivian and assumes it means he no longer has to follow through with Vivian’s plan to seduce Sonny.Later, Leo returns to Sonny, who is vulnerable after Will stops by to tell him Abigail killed Andre.

Theresa makes a deal with one devil (Xander) to escape another (Mateo), but unfortunately… she must leave Chloe behind. Eve and Brady are excited about their engagement and deliver the good news to John, who later brings up Theresa. Steve asks Roman for a favour – to take his job at Black Patch. Later, Marlena meets up with John and learns about Brady and Eve’s engagement.

Chad and Abigail consult with Justin about her case regarding her killing Andre. Later, after having learned Gabi was beat up in prison, Abigail shows up to face her friend. Stefan fires Kate and kicks her out of the house.

Rafe tells Gabi that Abigail confessed to murdering Andre. Justin tells Rafe that Belle sent a letter pressuring them about Hope’s annulment papers. Later, Hope is starting to soften her stance towards Rafe, but are interrupted when Kate arrives.

Abigail visits Gabi in the prison infirmary, apologizes for all she put Gabi through, promises she’ll do everything she can to get Gabi out of here soon. Chad and Stefan get into it… and it gets violent. Kate is rattled when a police report doesn’t go her way.

Rafe is about to sign the annulment papers but Hope stops him. Leo lifts Sonny’s phone, continuing on with taking down Sonny. Meanwhile, Sonny talks to Jeff the bartender, and he admits he and Leo are still very attracted to each other, but Sonny can’t do anything as long as they are working together.

Abigail confronts Stefan about sleeping with Gabby. Xander brings Theresa back home to a grateful Victor as Brady and Eve plan their future. John tells Steve about a new company that has developed a bionic eye and expresses the hope that he will be able to see John walk Marlena down the aisle.

Stefan threatens to press assault charges against Chad if Abigail tries to bring him up on rape charges. Brady’s stunned to return home from the hospital and find Theresa waiting for him. After she fills him in, Theresa pulls Brady into a kiss just as Eve arrives.

Xander’s on the verge of telling Eve that Theresa has returned to Salem, but then Eric and Jennifer interrupt. Meanwhile, Eve tells Jennifer she and Brady are engaged. Paul shares with Lucas that he thinks Chloe has been abducted by a drug dealer.

Eve interrupts Brady and Theresa’s kiss and is stunned to see her sister is back in Salem. She learns Theresa’s terrifying story, and Theresa learns that Eve and Brady are engaged. Will asks Kayla for her help regarding Rolf. Julie learns that Ciara and Tripp have a romantic date planned.

Chad goes to Melinda behind Abigail’s back and bluffs his way to getting a plea deal for Abigail. Meanwhile, Abigail talks to Jennifer about her road to recovery. Rafe gets another witness statement from Stefan about Vivian. Meanwhile, Kate is visited by an apparition of Andre.

Leo and Kate discuss their plans to destroy Titan. Meanwhile, Sonny tells Adrienne he and Leo are going to start seeing each other. He admits if Will had his memory back, he thinks they’d have a shot. Later, Sonny bumps into Leo, blissfully unaware of the hammer that’s about to drop…

Sonny tells Adrienne he?s sure there’s some mistake. Leo can’t be suing him for sexual harassment. Justin, after an encounter with Xander, looks over the papers. Earlier, Xander tells Justin and Adrienne it looks like Titan is about to tumble.

Ciara goes to Hope, who learns about the romantic night, and she sensitively broaches the subject with her daughter. Abigail realizes Chad leveraged her guilty plea to get a deal from Melinda Trask for Abigail to be sentenced only to court-mandated therapy. They run into Kate, and Abigail apologizes for killing Andre.

Theresa is on cloud nine, having spent time with Tate. However, she starts to realize her reunion with Brady isn’t a sure thing when he tells her once more he’s in love with Eve. They are interrupted when Marlena arrives with news of John and Paul going off to rescue Chloe.

In Mexico, John and Paul prepare to infiltrate Mateo’s hideout and rescue Chloe. In the prison infirmary, Lucas waits with Gabi for word from the judge about her release.

Brady has made a decision about which sister he wants to be with, but before he can make the announcement, Eve has one of her own. Also, Theresa confides in Victor about Chloe.

John and Paul are caught by Mateo and his minions, but Chloe saves the day. Later, Chloe calls Lucas. Victor learns about the lawsuit from Sonny. Will calls Sonny over to help him explain to Arianna that Gabi is coming home. Paul calls Will.

Desperate to regain his vision, Steve approaches Kate about the bionic eye being researched by a company DiMera owns. Unbeknownst to Steve, Kayla approaches Stefan about the research. Abigail’s grandmother Laura arrives and tells Abigail the judge has approved her to do the court ordered therapy.

Meanwhile, Chad admits to Kate that Gabi might be right about how Abigail may have slept with Stefan and framed Gabi because subconsciously she wanted to hurt Chad and Gabi. Rafe and the prison warden arrive to discover Gabi standing over dead Diane.

John and Paul bring Chloe back to Lucas. Chloe learns Theresa isn’t dead after all. Eve figures out what Theresa pulled. Meanwhile, Xander gives Theresa a hard time about enjoying her freedom. Xander also asks Brady to put in a good word with Victor.

Tripp tells Will that Ciara’s still avoiding him. Tripp returns to the loft, where Ciara swears everything’s fine between them. But she recalls how Chase raped her, and pulls back once more. Paul and John reunite with Will and Marlena. Will shares his progress on Rolf’s diary.

Chloe rats out Theresa for leaving her behind in Mateo’s clutches, enraging Brady. Ciara breaks up with Tripp, who commiserates with Claire who was just dumped by Theo. Hope challenges Ciara to face the demons.

Will and Paul talk about whether or not Will should pursue the development of an antidote to his amnesia. Marlena challenges Ben’s assertion that he has taken responsibility for his crimes and is now sane.

Theresa appeals once more to Brady, who is upset to learn that Victor knew of Chloe’s plight and refused to help her. Meanwhile, Eve and Xander assess their current situations. Claire and Tripp are on the verge of making love. Hope tells JJ Ben’s release may be on the horizon.