South Africa has a variety of diamond mines since the country is endowed with several mineral resources, and the mining industry has a significant impact on the country’s economy.

Not only does South Africa benefit considerably from these resources, but it is also important to note that the mining sector contributes significantly to the country’s economic prosperity. 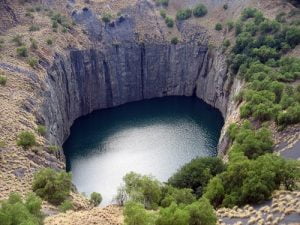 Diamond is clearly one of the most expensive minerals in the world, and South Africa is no exception. It is highly sought after, somewhat valuable, and a precious stone that is worth a lot of money.

Since the diamond strike in Kimberley in 1868, the country has been a significant nation in the manufacture of diamonds. We will be exploring the country’s largest diamond mines, and it is important to note that De Beers Consolidated Mines Company is responsible for nearly all of South Africa’s diamond output.

Sanddrif is located in the Lower Orange River region of the Northern Cape.

Cullinan diamond mine, formerly known as the “Premier mine,” is located in Cullinan, South Africa.

Another well-known mine in South Africa is the Finch diamond mine. It is a Northern Cape underground diamond mine.

De Beers Consolidated Mines owns and manages the Diamond mine, which was established in 2004.

Location: About 160 kilometres northwest of Kimberley, near Lime Acres.

Another diamond mine in South Africa is located in the province of Free State. The Koffiefontein Mine is another of the many Kimberley mines.

Koffiefontein, South Africa is the address.

The Venetia Diamond Mine in South Africa is a massive diamond mine. In fact, it is known for being the country’s greatest producer of the precious stone. It is situated in Limpopo Province.