Die Sentrum is a South African telenovela centered around a helpline call centre and follows eight counsellors who help callers with their troubles. These include alcoholism, domestic violence, the desperate search for love and secret lifestyles. It also showcases the issues of the counsellors and how they help themselves.

Premiere episodes of Die Sentrum air on SABC2 on Thursdays and Fridays at 18h00. 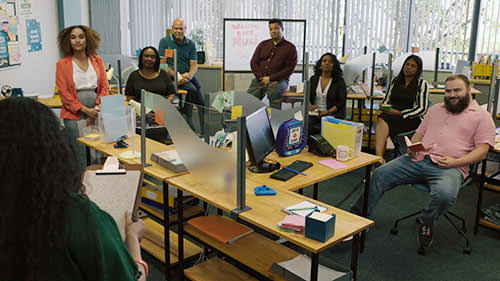 Muzi has a difficult call on his first day back at Die Sentrum but it turns out to be to his benefit. It seems as if Darren’s life seems is in order, but he is struggling with his family relationships.

Kelly takes a call from a battered woman who has locked herself in her bathroom to get away from her husband.

The centre’s staff is unhappy with Rochelle’s management style, but will Lucinda do something about it? Muzi isn’t sure about his relationship with Nicola, while Darren gets shocking news about Zade.

Naomi is not who she claims to be, Darren must deal with the fallout after Zade is called into the principal’s office, Lucinda has bad news for Rochelle and Muzi hasn’t lost his mojo.

Kelly receives an offer from Lucinda that she is unsure about but circumstances at home forces her to reconsider. Zade has to make a decision at school which has consequences.

Darren struggles to hide his secret life from his family. Kelly applies for the management position, but Nathan is not impressed. Daleen tries to help a desperate caller.

Rochelle has a bone to pick with Kelly, Zade is devastated that he didn’t act earlier and Naomi goes on a date with an older guy.

Naomi’s mother asks her for money and she has to take desperate steps to try and solve this problem. The new manager is announced. Darren performs and is surprised to see some familiar faces in the audience.

Muzi, Daleen, Kobus and Naomi can’t stop raving about their night out and while it’s the new manager’s first day, Rochelle finds herself being shut out by the staff.