Gabriel Mini whose full name is Gabriel Simphiwe Mini is a South African actor known for his role as lawyer Njabulo Chabeli in the SABC2 soap opera Muvhango.

He was born and raised in Thulani Informal Settlement in Soweto, South Africa 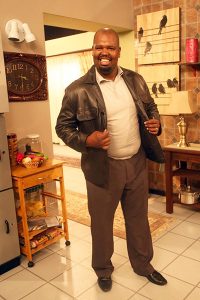 In 2013, he was cast in the Mzansi Magic serial opera Zabalaza as Thabo, a station commander and corrupt cop who facilitates Jazzman’s armoured car heists.

In the SABC1 sitcom Rented Family, he played Muzi, a self-made township entrepreneur who owns taxis, a shisa nyama, and the biggest house on his street.