He has also starred in other notable TV series such as Skwizas and The Throne. 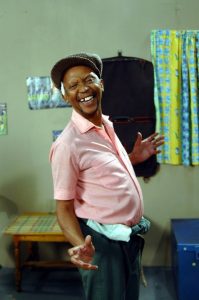 He also starred in the SABC1 edutainment series Khululeka and returned for the second season of the SABC2 sitcom Skwizas.

In 2018, he starred in the Mzansi Magic drama The Throne as Motsamai, the town clown with more wisdom than meets the eye.

Jerry Phele has an estimated net worth of $150,000 which he has earned as an actor.