Pietie Beyers (born 11 July 1988) is a South African actor and filmmaker known for his starring role as Dr Deon Visser in the kykNET soapie Binnelanders. 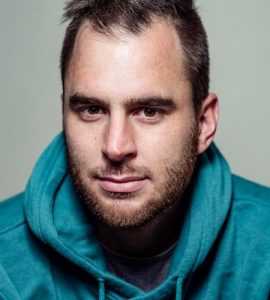 He matriculated from Hoërskool Jan van Riebeeck in Cape Town in 2006 and later attended The University of Stellenbosch, graduating in 2012 with an Honours degree in Drama.

Pietie’s first television acting role came in his senior year of high school, when he was cast as the younger version of Zatopek van Heerden in the kykNET drama series Orion (the elder version was played by Neil Sandilands).

The series, which debuted on July 11, 2006, is based on Deon Meyer’s novel of the same name and follows an explosive love triangle set against the backdrop of a serial killer investigation.

His next television appearance was in Season 1, Episode 3 of the kykNET drama series Vloeksteen (Unpolished Diamond), in which he played a guest character.

The next year, he appeared in another kykNET crime anthology murder mystery series, Die Boland Moorde, as a guest star (The Boland Murders).

In 2013, Pietie Beyers received Best Actor in a Short Film at the Silwerskermfees for his role in Beer Adriaanse’s comedy short film Beskermhere (Protectors).

In 2014, he co-starred in the drama short film Onder die Tafel alongside his mother Susanne Beyers (Under the Table).

He appeared as a journalist in an episode of the kykNET sitcom Buurtwag (Neighbourhood Watch) in 2015, and he played John in the first season of the kykNET drama Die Boekklub the following year (The Book Club).

Start Your Journey in Cryptocurrency Investing in BitiQ!