JP Pietersen whose full name is Jon-Paul Roger Pietersen is a South African rugby union footballer born on 12th July 1986 in Stellenbosch, South Africa. He plays as a fullback or wing for Leicester Tigers in the English Premiership. Pieterson was granted early release to join top French club Toulon in the Top 14 from the 2017-18 season

He had his his secondary education at Hoërskool Generaal Hertzog, Witbank, South Africa. At the age of 19 he made his provincial debut with the Sharks during the 2005 Currie Cup season. Pietersen was selected into the Springboks 2007 Rugby World Cup squad. He started in the first two matches scoreing three tries. 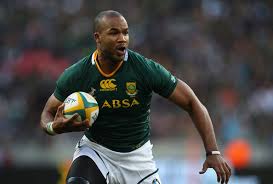 He is married to Megan Weir-Smith. He met his wife through Dusty Noble and the couple got engaged in 2014, two days before a test match against Australia at Newlands in Cape Town.

He has a net worth of $100,000 – $1M with his income source mostly from being a successful Rugby Player.

‪Goodbye🇫🇷 ‬ ‪Thank you @RCTofficiel for the opportunity to have been a part of this great club. To the people of Toulon, thank you for welcoming my family and I, we really appreciate the love❤️‬ ‪I just want to wish @RCTofficiel the best of luck for next season🔴⚫️‬ ‪Merci beaucoup 🙏🏽 ‬

JP Pietersen is back in Black and White

Pietersen, who served the franchise for more than a decade between 2005 and 2016, rejoined the Sharks in training this week.

The utility back made a name for himself in both the Currie Cup and Super Rugby formats. He racked up more than 150 appearances on his way to becoming a firm fan favourite for those who made their way to Growthpoint Kings Park on a weekly basis.

He earned himself a call up to the national team ahead of the 2006 Tri-Nations, where he made his debut against New Zealand. Pietersen went on to establish himself as a 1st XV starter, with Bryan Habana on the other wing, which lead the Springboks to world glory at the 2007 World Cup.

The 32-year-old made his first move abroad in 2013, signing a three-year contract with Japanese Top League side, Panasonic Wild Knights. However, he still played a role in the Sharks setup up until the end of the 2016 Super Rugby campaign.

Pietersen made a permanent move away from the Durban based team heading into the 2017 season, signing a one-year contract with English side Leicester Tigers. He then switched to French giants Toulon for a two-year stay in the Top 14.

However, he is back home now and fans are extremely excited to see their hero in action again.