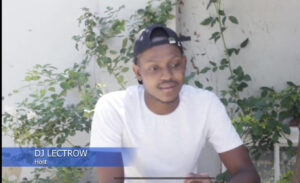 He attended Highlands North Boys High School where he matriculated in 2012. After high school, he studied towards a diploma in media practices at Boston Media House and concluded his studies in 2017.

He started off his career in Media in 2018 as a content creator and promo director having had the privilege of directing promos for multi-choice channels Mzansi, Magic, Mzansi Wethu, Mzansi Bisokop, 1magic and Zambezi Magic.

He was also part of the directing team that directed the pre shoot for the famous mzansi magic drama eHostela season 2.

Lectorw is mostly known for his work as a presenter for Evogue Radio an online radio station based in Johannesburg, where he hosts a Friday and Saturday evening music show called “Issa PreParty ” between 6 pm and 9 pm. The show holds a successful streaming audience of over 100 000 listeners worldwide. Outside of Radio, he is a DJ.

Lectorw now engages and play music from international DJs on his radio. Courtesy of his Radio show, he has gained slight international recognition and he is slowly rising to prominence.

His music is intimate and produced with a high level of appreciation. He has a YouTube podcast that is also doing well, it was launched in the first week of March.