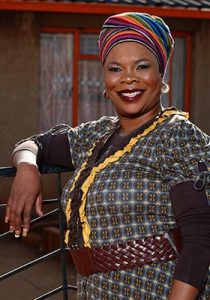 Gibson Kente Productions launched her acting career in 1980. Since then, she has toured nationally and internationally and has been in shows such as Generations, ‘Sgudi ‘Snaysi, Hlala Kwabafileyo, Kwakhala Nyonini, Ashiffa Shaba, Gaz’lam, Muvhango, Soul Buddyz, Isidingo, Backstage, Rhythm City, Stokvel, and Intersexions, among others.

She played Ma Josephine Rannko in the Mzansi Magic sitcom Samsokolo in 2013 and guest featured in an episode of the SABC1 docu-drama Ngempela the following year. She also had a leading role in the SABC1 drama series Sticks and Stones in 2014.

She had a leading role in the SABC1 sitcom Rented Family in 2017 as Sis Dina, an ex-beauty queen who lives on her previous triumphs.