The passions between Pabi and Nolo are thwarted from the start, but when Nolo finds out that everything he believed about his life had been a lie, he must choose between his father and mother, loyalty and love, good and evil.

Lithapo airs on SABC2 from Mondays to Wednesdays at 21h30 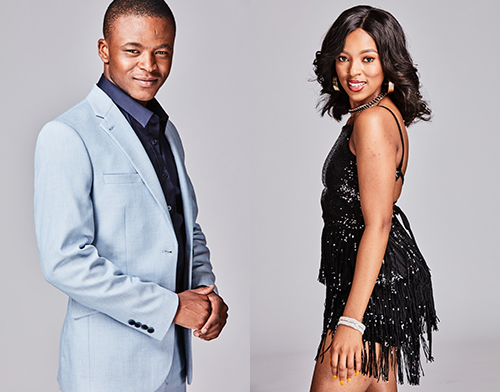 Pabi finally sees Likeledi, but the sight freaks her out and the traditional ceremony goes all wrong for Nolo. Thandeka’s attempt to seduce Senzo doesn’t go as planned, and Kabe seems to find more faults in Kitty.

Cebile’s request to score a banky from Thabang, comes with a price and Professor warns Lentswe about Kgotso. Maki seems impressed by Zano’s efforts at the community centre.

Senzo has a proud father moment with Nkosana, as Kitty’s mother (Evodia) wants Kabe to stay away from their daughter. Kgotso informs Thandeka that they are coming for Senzo and Tselane decides to leave Alex.

Cebile is on cloud 9 and Pabi wants to break-up with Senzo but Nolo is fearful. Professor thinks Senzo is after him and Andile leaves a mysterious suitcase for Mfazwe.

Thandeka decides to take matters into her own hands, as Nolo isn’t ready to release his mother’s spirit, which makes Pabi really uncomfortable.

Professor gets cold feet, and wants to pull out of the protest and Nkosana seals the deal with Lentswe, while Senzo goes through an emotional breakdown. Cebile uses the money from her brother to get more weed for Luke, as Mfazwe finally opens Andile’s suitcase, out of curiosity.

Pabi agrees to give Nolo privacy. Things get awkward at school for Cebile with her sour milk lunchbox, just as Zano assures Thabang that she’ll get them a stipend soon.

Professor finds Lentswe splurging money at the tavern and Kabe discovers Kitty’s singing talent. Thandeka has a flirtatious private meeting with Kgotso, as Buhle comes close to spilling the beans on a family secret to Senzo.

As Nolo waits for Pabi to finally break up with Senzo, Senzo reveals his sweet side, making it hard for her to follow through..

Out of excitement, Cebile shows off some public displays of affection in the school bus, as Thabang apologises to Kgotso for volunteering at the community centre for Zano, while Kgotso and Thandeka’s sexual tensions rise. Senzo then agrees to give Lentswe some land shares, on one condition.

Pabi asks for Nolo to be patient with her pending break-up to Senzo. Luke wants more weed from Cebile, while Patricia is suspicious of Mfazwe’s paranoia stunts.

Thandeka assures Nkosana that she’ll sort everything out with Kgotso and Thabang is stuck, having to choose between Kgotso and Maki.

Nolo suspects more delay tactics when Pabi suggests holding off the break-up with Senzo. What Pabi wants, is for Senzo to see that there’s more to her than meets the eye, as Thandeka takes care of the sexual tension between her and Kgotso.

As the protest goes ahead, Lentswe can’t get Professor to sit down with Senzo. Mfazwe looks into hooking up with Kitty, and Luke has a business plan for Cebile’s weed.

Nolo struggles to keep his resentment of Senzo in check, as Pabi starts fantasizing about living a real rural life with Nolo and fails an exam.

Kgotso goes MIA as the protest is underway, and Maki suggests Professor leads the march. Senzo wants to face Professor at the march. Mfazwe and Kitty are growing closer to each other and he vows to help Kitty with her singing career.

Thandeka gets hurt by Senzo’s genuine affection towards Pabi. Nkosana is angry that Senzo has passed the land claim project to Nolo, and Louw suggests rather, that he get closer to Nolo.

Zano finds Kabe writing his will as he convinces Evodia to let Kitty sing at the tavern. Luke asks Cebile to take a urine test for him and Nolo asks Kabe to come home with him to Qwaqwa.

Secrets are revealed as Kabe agrees to help Nolo conclude his rituals in Qwa Qwa, but has a strange request. Maki dishes out some eye-opening advice on Pabi to Nolo and Thabang reveals the truth to Zano about Thandeka and Kgotso.

Thapelo can’t resist Moipone, even after the documentary has been cancelled and Nolo learns the truth about Professor’s real background history. Senzo accidentally spills the truth, about his real relation to Nolo.

Pabi disrupts Nolo from telling Senzo the truth about them, but is then shocked by Nolo’s brazen request. Luke is stressed about his urine drug test results, which leaves Cebile in a tight spot.

Lentswe refuses to leave Patricia’s house and Zano finds her community centre’s stolen equipment. Louw is impressed by Nolo and thinks of letting Nkosana go and Thandeka suggests a plan to get rid of Nolo to a frustrated Nkosana.

Nkosana demands the truth about Nolo from Kabe, just as Thandeka makes a deal with Zano, for the price of keeping her secret about sleeping with Kgotso.

Cebile finds out that Luke is suspended and Mfazwe finds a way to open the house for Patricia and his sister, as Cebile decides to deal with Lentswe himself. Nolo and Pabi finally decide to secretly run off to Qwa-Qwa together, but…

Professor organises a mob to get rid of Lentswe and get Patricia’s house back. While spying, Nkosana discovers an upset Nolo with Pabi. With Kgotso hiding in the closet, Senzo discloses to Thandeka that he is actually in love with Pabi, breaking one of their fundamental marriage vows.