Makoti is a South African comedy-drama television series inspired by the blog “Missteps of a Young Wife” by Mike Maphoto and Thozama Mqikela that explores modern day relationships by following four couples at different stages of their relationship or marriage.
The series also explores some of the key elements that make or break relationships based on the four stages of marriage: honeymoon, conflict, bargaining and mature love. 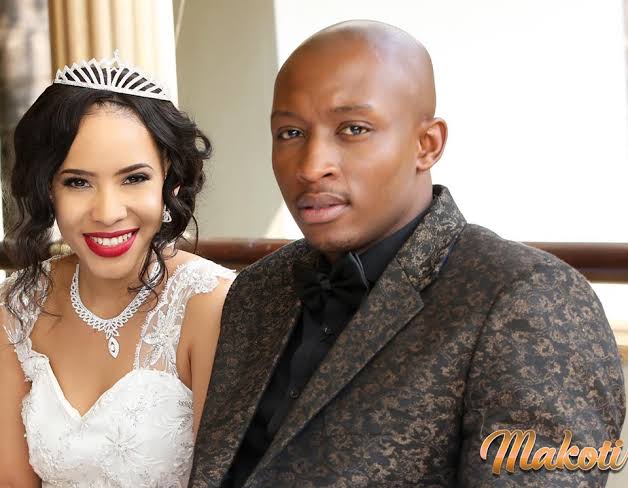 Lilitha and Mthoko prepare for their evening wedding and the only thing dampening their fiery passion and zeal is the idea of their unhinged mothers meeting for the first time.

The fine cracks start to show between Pastor Siyabonga and his wife Zandile as the pressure of their responsibilities and choices start to weigh on them as a couple.

An uninvited guest has the potential to ruin Lilitha and Mthoko’s fairy tale ending.

Judith makes Mthoko and Lilitha’s place small during the family lunch. She’s brought some critical items to do a little ceremony that cannot be skipped.

Noma and Judith have a shading match and Jessica reveals her virginity status, much to Mo’s delight and interest.

Siyabonga must officiate and an uninvited guest walks in at the wrong moment.

Mthoko sets the record straight and Kayise gets her closure. The wedding is back on. Lilitha receives a lot of teachings during speeches about how to be a proper Makoti.

Siyabonga gets double for his trouble and he uses the money to make his Makoti happy. Jessica and Mo get closer and comfortable around each other.

Lilitha begins her Makoti duties, or so she thinks. Judith has a surprise for her and Mthoko. Mo makes a deal with Jessica who first ridicules his suggestion.

Zandile has to work and not be with Siyabonga on his Pastor duties. Noncedo finds a gap and takes it.

Lilitha is under pressure to impress Judith’s visitors and her dish takes a dive leaving her totally stranded and staffed.

Mthoko is out and about while Lesedi works hard under the watchful eye of Judith. Mo has invited Jessica to his gig and things fall apart.

Zandile has to stand by her husband and be the supportive Makoti but she is frustrated. Judith frustrates the couple and ruins every moment they get together.

When Judith becomes seriously unreasonable, Mthoko steps up and agrees with Lesedi that they need to get the hell out of here, they plan a “prison break”.

Lilitha attends Khalangani’s umabo and learns about the tradition, Zandile commits to helping Siyabonga with his revival but wants to know what his plans are for them as a couple, outside of church.

Jessica’s work suffers and she gets a lashing from Lilitha, Mo comforts her. Mthoko faces his parents: he and his wife are leaving.

Mthoko and Lilitha re-adjust to their lives in Joburg, but Mthoko notices with growing unease how much Lilitha wants to retain her independence.

Siya and Noncedo grow closer together as she helps him brainstorm on ways to raise funds for the revival, after his disastrous meeting with the church elders.

Jessica and Mo’s feelings for each other continue to grow.

To Have But Not To Hold

Zandile and Siyabonga draw further apart as he gets emotionally closer to Noncedo.

Judith seeks comfort in her almost-makoti but subtly suggests that she should love to be with her true makoti & son right now.

Jessica and Mo plan for their big night, but fate won’t have it.

Judith bullies the couple into submission. Lilitha’s joke turns sour and ugly. Zandile takes a leap of faith and plans a surprise for Siyabonga.

Zandile feels insecure in her marriage and Siyabonga tries to comfort her. It’s D-Day for Jessica and Mo. Lawrence discharges himself from hospital.

Jessica googles sex tips for first-timers, Mo is not as confident and he wants Jessica to think. When they finally get their moment…

Now that Jessica and Mo have had sex, they try by all their means to not catch feelings. Mo fights with his Mom who wants him to come home to take his rightful place as prince, but he takes his frustrations out on Jessica and pushes her away.

Lawrence is not getting any better, but refuses to do blood tests. Zandile secures Bishop Somo Msiza and Andiswa for the revival, much to Noncedo’s chagrin.

Lilitha goes to KZN to be with Mthoko, Lawrence and Judith; but Judith continues to make her do all the heavy tasks.

Lawrence, worried about his test results, goes to see his healer who has bad news for him. When Zandile’s plan to get Bishop Somo Msiza and Andiswa to the first night of the revival falls through, Siyabonga blames her and they get into a huge fight.

Mo has a big surprise waiting for him at his apartment. Noncedo has her claws on Siya, at Zandile’s displeasure.

Mthoko and Lilitha fight about his Mom’s influence over him, but she soon realizes she went too far.

Lawrence believes he has prostate cancer but doesn’t tell Judith. Zandile tries her best to make things right with Siya but is rewarded with a nasty discovery.

Mthoko secretly plans a life in KZN, and Lilitha puts in an offer for a house without Mthoko’s knowledge.

Zandile is still reeling from the discovery of Siyabonga and Noncedo “emotional cheating” over text messages.

Mo moves into Jessica’s place and they start to get cozy with each other.

Love Has No Rules

Jesica starts to get frustrated with Mo’s immaturity. Lilitha gets no sympathy form Zandi and Noma but she makes a decision to mend things with Mthoko.

Mo realises he has some serious competition. A fed-up Zandile confronts Noncedo. Judith confronts Lawrence on her suspicions that he’s gone back to drinking.