Martelize Kolver is a South African actress and voice artist known for her role as warden Liefie on the SABC2 soapie 7de Laan. 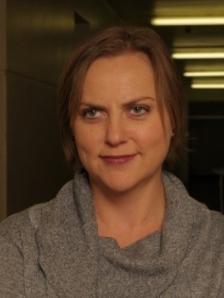 Martelize earned a BA Drama with Honors in Media and Drama from the University of Stellenbosch, where she graduated in 1997.

She’s appeared in a variety of productions on stage, including God van Chaos, Die Ryk Weduwee, Eet Alles, and Ysterastes. Mark Graham, Shirley Johnston, Colin Ward, Marlene Pieterse, Darryl Nel, and Chris Weare are just a few of the notable theatrical directors with whom she has collaborated.

Martelize has also done a number of voiceover projects, including inserts for the magazine show Pasella, Fine Music Radio, and the South African Broadcasting Corporation (SABC).

Her portrayal as Helene Fouché in the kykNET crime anthology series Die Boland Moorde (The Boland Murders) in 2013 was one of the primary cast members.

She joined the cast of 7de Laan as Liefie in 2018 and made her first appearance on June 8th.