She is popular for her signature blue-coloured hair and her self-created music genre called “Future ghetto punk”.

She came into limelight after her hit collaboration “Midnight” with Dj Maphorisa. Her sound is very unique and she calls it “Future Ghetto Punk”.

Moonchild Sanelly has worked and performed with the crème de la crème of the music industry. Some include Beyonce, Busiswa, Wizkid, Dj Maramza, Dj Maphorisa and many more.

Many don’t know that apart from being a musician, Moonchild Sanelly is a fashion designer. She actually went to Fashion School to study fashion design as a course. 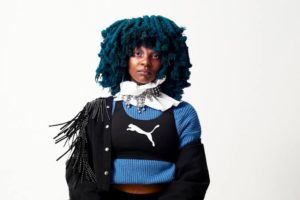 She has three daughters who stay at Port Elizabeth. They all stay with their father’s grandmother and one of them, Artemis is a musician. Artemis took after her mother and she is set to release her EP.

Since coming into the limelight years ago, Moonchild Sanelly has made quite a fortune from her music. Her net worth currently stands at $700,000.

She has released over 15 songs and has worked with different artists. Moonchild Sanelly currently has one album and one EP (2019).