Nambitha Ben-Mazwi (born 1 December 1988) is a South African actress known for her starring role as Lulama in the e.tv telenovela Broken Vows. 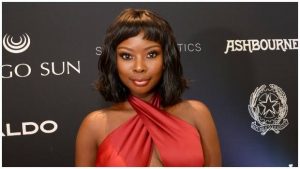 She was born on the 1st of December 1988 in Gqeberha, SOuth Africa. As of 2021, she is 33 years old and celebrates her birthday on December 1st every year.

She worked as a marketing strategist, in business development, and on radio and television both locally and internationally after graduating with a degree in Business Science Marketing (Honours) from the University of Cape Town in 2011.

She appeared in the second season of the eKasi+ police procedural series Traffic! in 2016.

She debuted in Mzansi Magic’s Doubt in April 2016, a mystery drama about a bride’s personal struggle when her husband is jailed at the altar for the death of a stripper at his bachelor party.

In the e.tv serial Broken Vows, she played Lulama, an aspiring designer who heads the wedding couture section at Yours Truly Concepts.

She also starred as Nandi in the BET miniseries Madiba, which aired on Discovery Channel in South Africa in 2017.

She played Benathi in the SABC1 drama series Diamond City in 2018.