Nandi Mbatha (born 27 November 1996) is a South African actress and model known for her starring role as Simlindile “Simi” Ngema in the Mzansi Magic telenovela Isithembiso. 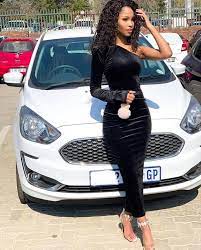 She was born on the 27th of November 1996 in Newcastle, KwaZulu-Natal, South Africa. As of 2021, she is 25 years old and celebrates her birthday on November 27th every year.

She is a student at the University of South Africa studying law. She is returning to the University for the second time. She began studying political science, but due to personal issues and her acting profession, she was unable to complete it.

Nandi Mbatha was previously linked to Anga Makubalo, better known by his stage name NaakMusiQ, a South African DJ, singer, music producer, and actor. The couple, however, eventually split up. Naak allegedly threw her out, making her homeless for the time being.

Mbatha was allegedly in a new relationship with Junior Khathi, the son of Afrotainment label boss and Gqom artist, DJ Tira, after their breakup, according to a Zalebs report.