Nonhle Thema is a South African TV presenter, Actress, and Producer. She is the Founder of Nonhle Thema Productions and was born on the 15th of October 1981.

She attended Sundown High School, Johannesburg where she graduated in 1999. Nonhle is well known for presenting the music shows O-Boma and O-Access, both on Channel O. 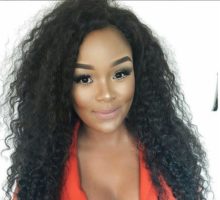 Her mother is known as Cynthia Shange who is a veteran Actress while her father is Derrick a renowned Journalist and Author.

She has dropped the glitz for a more quiet and private life with her young family; daughter and new husband. According to Move Magazine, she has been happily married for over a year. She is married to her long-term boyfriend and former fiance Arthur Bolton.