Oupa Manyisa (born 30 July 1988) is a South African football player who last signed as a midfielder for TTM F.C. in the Premier Soccer League and South Africa. 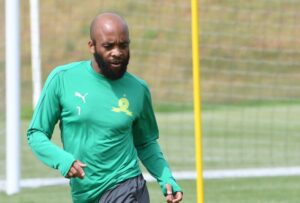 Oupa played for many clubs at youth level; he started his youth career at Napoli FC (SA amateur side) when he was seven, and nine years later he joined PJ Stars.

He also trained with Africa Sports Youth Academy under Harold Legodi, who played an instrumental role in developing his talent. Legodi helped Manyisa to have trials at big English clubs such as Chelsea, Manchester United, Blackburn Rovers and French sides in Caen and Strasbourg.

Manyisa joined Orlando Pirates in 2008 due to being scouted, he immediately impressed the coaching staff. “Ace”, as he is known as in the football pitch, had a great 2010/11 season forming one of the best midfield partnership with Andile Jali. In that season he helped Pirates win the first-ever domestic Treble in PSL history.

Oupa scored the only goal which was a cracker outside the 18-yard area against bitter rivals Kaizer Chiefs in the final of the MTN8 which he scored in extra time. Their stellar partnership proved to be good again when they won another domestic treble. Oupa has enjoyed good football from then being a force to be reckoned in the Pirates starting line-up.

Ace holds the record of most appearance in a season for Orlando Pirates alongside Senzo Meyiwa which he achieved in the 2013/14 season. He played 51 out of 53 matches and this was due to their long run in the CAF Champions League.

On 9 August 2014, Oupa scored a penalty in a league opener against Moroka Swallows which they lost 2–1. On 13 August Oupa scored a brace in a 2–2 draw against Bloemfontein Celtic.

He joined TTM in 2020/2021 season & he was released after a month without playing even one game alongside with Joseph Malongoane.

Manyisa made his debut for the South Africa national football team in a 0–0 draw with Sierra Leone on 8 October 2011. He represented Bafana Bafana at the 2015 Africa Cup of Nations and scored his first international goal during a 1–1 draw with Senegal during the group stage.