Pansy Tlakula (born 18 December 1957) whose full name is Faith Dikeledi Pansy Tlakula is the Chairperson of the Information Regulator of South Africa. 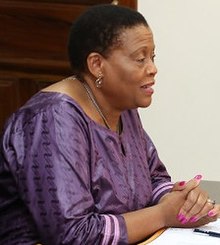 She got married to Tlakula at Waterval township, Elim in Limpopo. Her husband’s family, the Tlakulas, are a powerful ruling class at Elim.

Tlakula was named to the African Commission on Human and Peoples’ Rights in 2005. (ACmHPR). She worked with the ACmHPR for 12 years, from November 2007 to November 2017.

She served as Special Rapporteur on Freedom of Expression and Access to Information, Chairperson of the Working Group on No Specific Issues Affecting the African Commission’s Work, and Chairperson of the ACmHPR from 2015 to 2017.