Quiteria Kekana (born 1983 in Katlehong, Ekurhuleni) is a popular South African Fashion designer known as one of the co-founders of popular brand Quiteria & George. 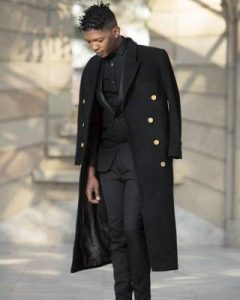 Quiteria Kekana grew up in the Limpopo settlement of Blood Rive, near Polokwane. He was schooled in Ernest Primary School throughout his early years, and after secondary school, he continued his studies at Pretoria Technikon, now known as Tshwane University of Technology.

Quiteria was drawn to the fashion industry by the opportunity to express himself through cloth, which is constantly changing. This revelation fueled his desire to become a designer and to encourage the kids of his village to consider the arts as a career option.

Quiteria lives by the phrase “Stay true to yourself,” because the only thing that distinguishes and distinguishes people is their uniqueness, unique lived experiences, and unique interpretations of the world.

Malelu and Kekana met in 2010 at Mpumalanga Fashion Week, where Kekana was the ambassador and Malelu was exhibiting his collection. They met, clicked, and the magic began, and the rest, as they say, is history.

The team is also known for dressing A-list celebrities at all of South Africa’s major red carpet events. To name a few, they are now working with Boity Thulo, Lerato Kganyago, Thando Thabethe, Dineo Moeketsi, and Terry Pheto.

Quiteria & George, according to their website, is a distinctly South African company that uses design to convey a story and encourage change and innovation.

Quiteria & George have a creative advantage over its competition because Africa is the epicenter of inspiration in the business. They’ve able to produce couture clothing with moving structures, structured silhouettes, and even graphic and delicate handwork features on each of their distinctive designs, thanks to their innovative position.

Quiteria Kekana has an estimated net worth of $400,000 which he has earned as a fashion designer.

How to Install the Nedbank App on iPhone & Android