Reandi Grey (born in Pretoria) is a South African actress known for her role as Esti Fouche in the SABC2 soapie 7de Laan. 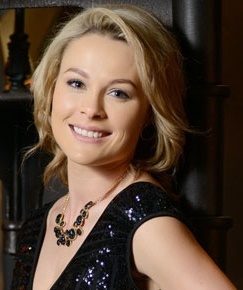 She matriculated from Hoerskool Waterkloof and proceeded to attend the University of Potchefstroom, where she graduated with an honours degree in Graphic Design and Development Communication in 2011.

Before joining 7de Laan in 2017, she worked as a cosmetics artist and graphic designer.

Esti, her character on 7de Laan, is unusual and free-spirited, and she approaches her work with tenacity and passion.

It was Reandi’s first acting role, despite the fact that she had no previous acting experience. On August 18, 2017, she made her first appearance in the role.

In 2020, Reandi landed her first leading part on television, in the M-Net soap Legacy, portraying Elisabeth Price, the middle sister who the Price family relies on to make things happen.