Stella Ndabeni-Abrahams (born 30 June 1978) is a South African politician and the current Minister of Telecommunications and Postal Services.

She is also a former Deputy Minister of Communications and was born in Mthatha Eastern Cape, South Africa. 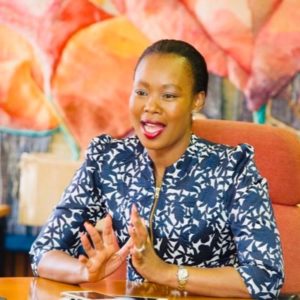 She was born on the 30th of June 1978 in Sakhela, a village near Mthatha. Stella Ndabeni-Abrahams is 43 years old as of 2021 and celebrates her birthday on June 30th every year.

She is married to Thato Abrahams and they have three children together.

She has an estimated net worth of $5 million to $10 million which she has earned from her political career.

Communications Minister Stella Ndabeni-Abrahams has had an inauspicious start in her new role, commentators say, but whether she will match the controversies created by her predecessor is yet to be seen.

Reacting to footage revealed over the weekend showing Ndabeni-Abrahams trying to block media from filming a protesting crowd during an ANC manifesto launch in the Eastern Cape, Wits University head of journalism Franz Kruger described it as unfortunate.

While the minister’s swift apology was encouraging, he said, it was too early to predict whether she could restore the confidence lost in her portfolio during former communications minister Faith Muthambi’s term of office.

Muthambi’s tenure was plagued by controversy, which culminated in parliament finding she had politically interfered in the SABC and “displayed incompetence”.

“In the run-up to the elections, one needs to pay close attention to these incidents. But that she apologised so quickly does suggest that we won’t see any more of this behaviour,” Kruger said.

“The first thing that drew attention was when she fell out with the SABC after she was appointed. There was a row about what was going to happen at the SABC now that they have pulled back from their plan of retrenching.

“We haven’t seen what she plans to do instead, because there is still a financial crisis at the SABC. It is not yet clear what we are going to see in the future.”

The South African National Editors Forum (Sanef) was less forgiving. “While we note the minister has apologised, we are concerned that she refers to her action as an ‘altercation’.

Given her high-profile portfolio relating in particular to the SABC, we would like to have an urgent meeting with her to discuss the matter and our concerns,” it said.

Democratic Alliance MP and communications spokesperson Phumzile van Damme said the party was not surprised by the incident, suggesting it was par for the course in that portfolio.

“The minister’s actions are no different from previous ANC ministers who sought to control the SABC through political interference. Her act is not a once-off or a mistake. She was doing what the ANC has been doing for years, and were allowed to be by captured SABC management and boards.”