Thabiso Sikwane is a seasoned broadcaster who is currently working with Kaya FM. She is a talk show expert who is well-known for her KAYA FM Show. Thabiso Sikwane returned to KAYA FM after a seven-year absence from the station. 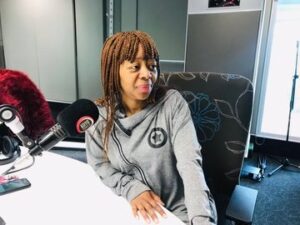 Thabiso is happily married to “DJ Fresh,” her true love (Thato Sikwane). She has been married to DJ Fresh for sixteen years and together they have four children.

Thabiso is a Wits University English and Sociology graduate. She progressed to the Voice of Soweto community radio station. She had her first taste of talk radio after a lot of nagging to try new stuff, and she loved it.

This talk-show host and seminar devotee is also a Nelson Mandela Children’s Hospital ambassador and runs her own swimming academy.

In 2008, the presenter of SA FM’s Afternoon Talk put her abilities to the test in one of South Africa’s most difficult marathons, the Comrades, for which she trained for months.

Thabiso’s dreams are constantly realized, and it’s difficult to understand how she continues to achieve that while still becoming a caring wife and mother.

Thabiso, in addition to her many accomplishments and dreams, studied to become a swimming coach and attempted to open her own swimming academy, which she did successfully.

This talk show host, businesswoman, and career woman is surrounded by a group of women who cheer her on as she pursues her goals.

She has an estimated net worth of $150,000 which she has earned as a broadcaster.