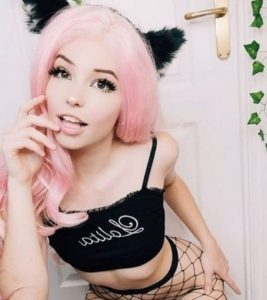 Delphine has been using Instagram since 2015. She created a YouTube account in July 2016. Her debut video, a makeup instructional, was uploaded the following month. Delphine started posting images of herself modeling on Instagram in 2018, utilizing accessories including pink wigs, thigh-high stockings, and cat ears to help create a “strange elf kitty lady” style. She also produces cosplay-related content on a regular basis, featuring characters such as Harley Quinn and D.Va.

Delphine established her online store on July 1, 2019, with a product called “GamerGirl Bath Water.” The $30 (£24) product was sold as the remainders of her bath water in a jar.

She has an estimated net worth of $2 million which she has earned as an adult content creator.